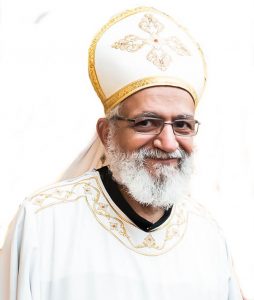 Father Mauritius M. Mikhail was born on July 31, 1953. He earned a Bachelor of Science Degree in Medicine (MBBCH) in 1977, a Diploma in Social Development in 1987 from the Coady International Institute, and a Master of Internal Medicine Degree in 1988. His Holiness Pope Shenouda III ordained him a presbyter on January 11, 1994. He served a the Church of Saint Maurice & Saint Verena in Cairo, Egypt from January to September 1994; and the Church of Virgin Mary & Archangel Michael in Connecticut from September 1994 to September 1996. He has been serving in Saint George Church in Bellflower, California since September 1996. Contact: 562-753-1974 Email: frmmm (AT) verizon (DOT) net