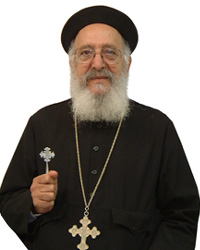 Fr. Abrahim Aziz Gindi was born in Cairo in 1929, and earned a Bachelor of Science degree as an Architect from Ain Shams University in 1951. He worked as an architect in the Ministry of Defense for nine years.  He served in Sunday School and was a board member in St. Mary Church in Masarra, Shobra, Cairo, until his ordination on April 18, 1962 by H.E. Metropolitan Athanasius. He served at St. Mary and St. Rueiss Church in Abbaseya, Cairo. He was ordained a Hegumen on June 1st, 1968. He served for short periods in California, at St. Mark in L.A. in 1971 and again in 1974. In September 1980, he came permanently to U.S.A. to serve in the new church of St. George in Bellflower and has been there since. He was instrumental in establishing Archangel Michael Church in Santa Ana, and St. Mina Church in Riverside. He served all three churches until new permanent priests arrived for them. He also taught at the Seminary in Los Angeles for many years, and is the Secretary of the Ecclesiastical Council for Family Affairs in the Diocese.